WHOIS - Search your Chinese domains below

Welcome back again to our Chinese Domaining Masterclass blog series!

We hope our Chinese domaining expertise provided through this series has helped guide you along the way as you buy and sell numeric domains in the China market. We’ve covered a few different numerics, all consisting of their respective pros and cons, but regardless, we hope that the information has been of great value to you!

For this article, we’re going to cover some ground on what is universally known as China’s “lucky” number: The number 8.

The number 8 in Chinese culture is considered the all-conquering lucky number. Much like the number 4 we covered last time, the number 8 also derives most of its “luckiness” out of sheer coincidental pronunciation. In Mandarin, the character for 8 (八) is pronounced “bā,” which is very close to 发 (fā) in certain dialects, such as the prestigious Cantonese dialect of the rich southern provinces.

This sound-alike character 发 (fā) has many meanings, the most prominent of which is “to prosper,” especially in a financial sense. Consequently, the number 8 symbolizes “generating wealth,” “getting rich,” and “to prosper.” 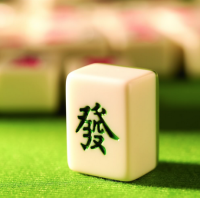 The character "Fa" in Chinese Mahjong.

In the context of investing in numeric domains with the number 8, this number is very well-known and lucrative because of what it represents: wealth, prosperity and riches. If you’re trying to sell something to a Chinese consumer, having 8’s in your domain string can be very beneficial (so long as every other number makes sense, of course). To put this into perspective, when Chinese people are choosing something with that deals with numerics, such as a car license plate, a mobile phone number, or a QQ number, the number 8 is definitely preferred. The number 8 is considered so lucky and valuable in Chinese culture that sometimes the price for buying a car plate with several 8’s can be higher than the price of a luxury car!

Because of the popularity and prestige associated with the number 8, many of the top-selling numeric domains of all time include the number 8 in the domain name (all data provided by DN Journal):

There are many sound-alikes for the number 8, including “fortune,” and “a bar.” It can commonly be combined to mimic the English term, “bye bye” as well, because of its pronunciation.

Now, let’s go over three categories that domain investors should always keep in mind when researching and registering new Chinese domain names that deal with numerics: References, Puns, and Units of Innate Meaning.

8848: This was the domain name of China’s first-ever B2B e-commerce website. Also, 8,848 (meters) was the height of Mount Everest in Chinese school textbooks, which universally tag the mountain as “the highest spot on this planet.” Consequently, 8848 in the typical educated Chinese mindset means “the very peak” of life or career. These days, the textbooks have been rectified with a more precise measurement of the mountain, which is actually 8,844 meters high. Since the rectification happened over a decade ago, it’s safe to presume that most Chinese netizens these days associate the number 8844 with the meaning originally carried by 8848.

88: Pronounced “ba ba,” this sounds like 拜拜 (bài bài, sounds like the English phrase for goodbye, “bye bye”) which is why one often sees Chinese WeChat or QQ social-communication users sign off with “88.” 88 also sounds exactly like 爸爸 (bà ba) which means “dad/father” in standard Mandarin.

As mentioned several times throughout the article, and possibly the most important aspect of the number 8 that we would want domain investors to take away from this, is that the number 8 is symbolically a lucky number, representing wealth, riches, fortune, and money.

Moving forward in your Chinese numeric domain name investing, always remember that the number 8 can be very powerful, influential, and sought-after if you use it the right way! If you have any further questions that relate to the number 8, or any numeric for that matter, contact us and our team of experts will do our best to help you answer any questions you may have. In the meantime, head over to ChineseLandrush.com and take a look at our list of hundreds of meaningful, premium-sounding, and readily available Chinese domain suggestions!

Also, if you have a portfolio of English names that you want translated properly into Chinese, let us know! We help domain investors translate English names into Chinese the right way (not the Google way), to get them going on their journey of IDN investing. Not to mention this "My Name Ideas" service is completely free as well!

Stay tuned in the weeks ahead for more in-depth coverage of Chinese domain investing know-how!